Finally some good news, the Taitu hotel is not as damaged by the fire as we previously thought. I went back there for lunch today, the restaurant, practically untouched, has reopened; they continue to offer their daily vegan buffet, and above all, the beautiful wooden staircase has been preserved. However, very little remains of the Jazzamba jazz lounge which has been reduced to a pile of ashes. From what I was told, the fire actually started due to a fault in the electric system there in the lounge, and not in the kitchen. 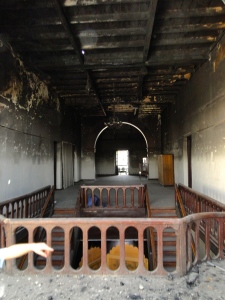 I also went upstairs in the main building to look at the first floor lobby where art exhibitions used to take place. I was pleased to see that although it still bears traces of the fire, the damage is relatively minimal and renovation should be quite straight forward. The situation is the same in the original bedrooms around the lobby: only one of them was seriously damaged, the others still have their paintings intact on the wall. 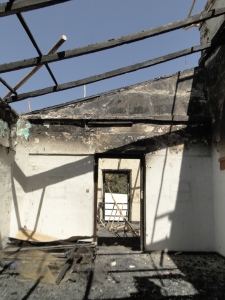 One of the collapsed roof at Taitu hotel

This weekend, a small art festival was organised by the dancer Melaku Belay to support the renovation as well as encourage residents of Addis to go to Taitu and bring some life back into the place. More events of this kind will be organised in the coming months so Taitu hotel can remain the soul of Addis.