Timkat or the Ethiopian celebration of Epiphany

Addis is still wearing its festive colours after the Timkat celebrations which took place on Monday. All the streets of the capital were decorated with yellow, red and green (the Ethiopian colours) banners, flags and ribbons; people walked about in their traditional clothes, the women wearing the white embroidered Ethiopian dress with the natala (light white cotton head scarf) and the men dressed all in white. The city was overtaken by an atmosphere of intense celebration.

the Timkat procession leaving the church

Timkat or the day of the Epiphany is an important day in the Ethiopian orthodox calendar commemorating the baptism of Jesus by John the Baptist in the Jordan river. In contrast, in the Catholic faith, the day of the Epiphany symbolises the three Wise Men’s visit to baby Jesus in Bethlehem (Gospel of St Matthew). During the ceremony of Timkat which starts on the eve of the actual day, the Talbot, a model of the Ark of Covenant, is wrapped in richly embroidered cloth and carried in a procession on the head of the priest. Ethiopians believe that the original ark of the covenant which contains Moises’ tablets inscribed with the Ten Commandments, is kept in a chapel in the northern and ancient city of Axum. However, apart from the guardian of the chapel, a function carefully passed on from generation to generation, no one is ever allowed to see it, not even the Patriarch.

In Addis, each church starts its own procession to eventually converge in a massive flow of people in Jan Meda, the wide open space north of the city where the Patriarch is to address the Nation on Timkat day. As a symbolic gesture of the Baptism ceremony, the Patriarch sprinkles water on the pilgrims attending it. In a unique display, the Priests and abbots, wearing their most elaborate and colourful outfits and umbrellas on leaving their respective churches, are greeted along the way by pilgrims chanting, kneeling down and respectfully bowing to show their faith.

In Gondar, the former capital of Abyssinia in the Amhara region, the Timkat celebration is all the more special. On this occasion and only on that day of the year, the bath of Fasilades, built by the 17th century emperor of the same name, is filled up with water. To re-enact Jesus’s baptism, pilgrims jump into it in the belief that they will purify themselves. 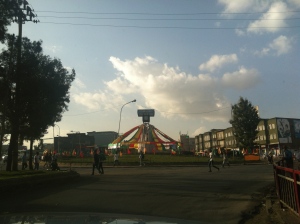