A week in Rwanda

Since I took on the UN project I am currently working on, I started travelling in the East Africa region to document and compare development projects in agriculture. I spent last week in Rwanda, known as the country of a thousand hills. Going from Addis Ababa to Kigali is a bit like going from Southern Italy to Switzerland, in the sense that Italy has a strong culture spanning more than 2000 years and amazing sites to visit but it is chaotic, while in contrast, Switzerland is very tidy and functional. 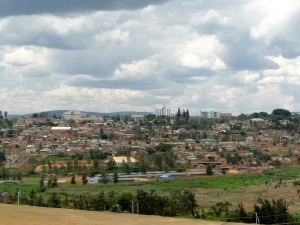 A view of Kigali

Rwanda’s capital, Kigali, is a very attractive and green city built on several gentle hills, and according to people who have lived in several African countries, it is one of the nicest cities to live in. It is not difficult to see why: it is clean and tidy (plastic bags are forbidden in the whole of the country), it is well organised and friendly, it has a strong urban planning, it is not too polluted, the shops are well supplied, the telephone and internet network works well, but it may not have the rich culture and history Ethiopia can claim. That said, Rwanda is trying to rebuild itself as a peaceful country after the trauma of the 1994 genocide against the Tutsis. I found people extremely friendly and less motivated by greed than in other places: they were genuinely helpful rather than trying to get money out of visitors. On the whole, there is a strong motivation on the part of the Rwandan people to look beyond one’s selfish interest and work in the interest of all. 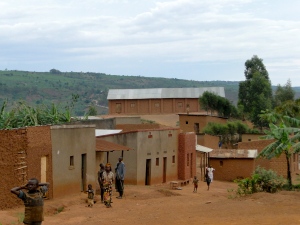 A remote village in rural Rwanda

Visitors usually go to Rwanda to see the gorillas in the Parc des Volcans in the North close to the border with Uganda. I didn’t have time to go there as I was travelling south for the project I was working on. I went to visit many villages where development organisations are trying to support smallholder farmers in improving agricultural productivity and marketing, while preserving the environment they live in. In Rwanda, an integrated approach has been piloted whereby poor farmers were given a cow which provides nutrition (the milk), income (the sale of milk), improved soil (organic manure) and energy (with a biogas system).  As a way of repayment, they have to pass on the first female born calf to another farmer in the community. After the success of a pilot project, the approach is being implemented at national level through the government’s One Cow per poor Family Program.

Travelling around the countryside and visiting rural villages, I could also see the extent of the 1994 genocide. Every single household had a grave in the backyard, where parents or relatives laid to rest. When asked about it, people acknowledged the genocide and could talk about its economic consequences for the country, however, they couldn’t be too personal about it. The painful wound is still open. 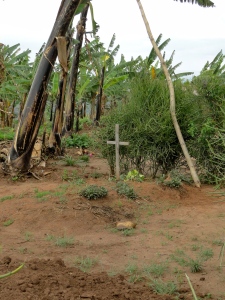 A family grave in a Rwandan farmer’s backyard

I visited the Nyarubuye Memorial, one of the eight national memorial sites of the genocide. Located in the Kirehe District close to the Tanzanian border in the south-east of the country, it used to be a catholic church and monastery before it was turned into a blood bath where more than 51,000 people were killed in atrocious conditions.  The Memorial’s guardian who took me on the tour had most of his family killed there. He explained to me what had happened and how the people were horrendously tortured and killed. In the recently opened museum,  a multitude of bones and skulls from the victims found there are on display, together with the clothes they were wearing at the time. Also on display are the sickening tools and instruments of torture, such as hammers, machete, knives or iron sticks, used against the victims. Many of the skulls were partly broken showing evidence of cruel injuries. Why is humanity not learning from the lessons of the past, why does mankind have to be so cruel time and time again? 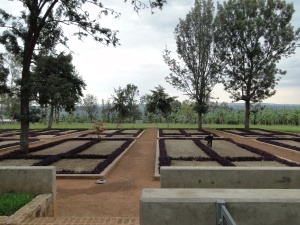 The Nyarubuye genocide Memorial in the Kirehe District of Rwanda