We have all heard of Zanzibar, the Indian Ocean island off the coast of Tanzania, famous for its abundance of spices, beautifully preserved beaches, and history as a crossroad of cultures, so I felt very lucky when I was asked to go there as part of a project to document agricultural development projects on the island.  From Addis, it is a three hour direct flight so an easy destination for a short-term project.

In the last fifteen years Zanzibar has become a very popular tourist destination for package tours and honeymooners looking for an exotic location, however local farmers are still struggling to make a living. I was suprised to see the East coast of the island completely built up with self-contained holiday resorts, where tourists can enjoy Western style comfort with very little contact with the islanders. Most of these resorts are foreign owned, I was told, they work mainly with tour operators in the Northern Hemisphere who offer all-inclusive packages paid up front, which means that the largest part of their income doesn’t even need to go through Zanzibar. In fact, not all resorts contribute to the local development. They prefer to employ well-trained staff mainly from Kenya, where the tourist industry is more developed and the level of service higher, giving very limited opportunities to local people to profit from the tourism boom. Some of the businesses give back to the local community by building a health centre or even a school, however, as I understand, their contribution remains rather limited.

The local farmers community I visited benefited from the help of an international development project which introduced so-called Farmers Field Schools, a type of practical training whereby farmers are taught the basics of sound agricultural practices. To do so, they gather in a group and choose the commodity for which they need to be trained. A communal plot is made available where they learn basic techniques to improve yields and production. The group I went to visit chose to grow paddy rice, the staple diet in rural Zanzibar. After a couple of years of applying the school’s teachings, they managed to produce a surplus they could sell and were contracted by the local government to produce rice seeds to lower imports of seeds into the country. Development projects often raise doubts as to their effectiveness,  however, in this case farmers  say their livelihood has improved as their food security is now guaranteed. In the past, they were always struggling in-between harvests but now they have enough rice in store to cover the lean period. Their rudimentary way of life cannot be compared to the lavish resorts on their doorstep, however they feel their situation has improved. They live in a brick house with a tin roof (a measure of success in poor rural communities), have a small garden plot where they grow banana, cassava and other vegetables for their own consumption, and have been able to buy a bicycle for transport. The most successful ones have even managed to buy a pick-up car.

the kitchen inside a Zanzibar farmer’s house

Of course, I was no better, I too enjoyed the beauty of this amazing island in the comfort of the place where I stayed, even if I hoped local people would benefit more from tourism. Apart from taking visitors on short boat trips, guiding them through the town or selling souvenirs, I didn’t see much interaction between the holiday resorts and the local people, and that is missing in my view. Doing simple things like eating a grilled fish from a local stall on the beach is not an option as resorts have taken over the island. Stone Town, the old walled town of Zanzibar, may be the one exception as it still is a very pleasant town to wander around.   A few hundred years ago, it was a vibrant crossroad of cultures on the spice route going East, and even today, it has somehow kept a special atmosphere with its unique architecture mixing arabic and indian style. It was also a big trade centre for African Slaves going to the Middle East and further, its more gloomy past as testifies the Slave prison trade. Today, many buildings are in the process of being renovated which is bringing back the magic of the place, made even more special by its amazing setting by the sea. I could have wandered around for days in its narrow alleyways  if I had had the chance, sitting on a roof terrace to watch the sunset but I wasn’t given the time on that occasion. 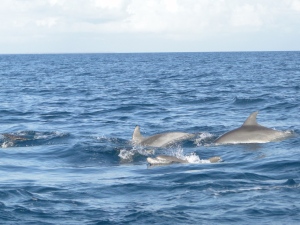 Failing that, I managed to go on a boat trip with my colleagues to swim with dolphins on our last morning before leaving the island. That was special too. We had to set off at 6am to see the dolphins when they were still close to the shore. As the water warms up in late morning, they start moving offshore in search of colder water. It took us about half an hour on a small motor boat to reach the area where they gather. We knew we were getting close when we saw another four boats doing exactly the same: looking for the dolphins, not to say chasing them (some of the faster motor boats were speeding too much in their competitive run to be there first). I actually felt for the dolphins in that unwelcome run for them. As soon as we saw them elegantly jumping out of the water, we had to dive in with our snorkeling equipment to swim in their company. The experience was uplifting: I could see under the water a dozen of dolphins swimming in rythm about four metres away from me, of course I could not touch them or swim on their back, but I could just watch them going deep down into the ocean to come back up a few minutes later to breathe. Dolphins have the reputation of releasing positive energy to their surroundings, after this experience I believe it is true, we all came out of it with a big smile on our face.

3 comments on “Interlude in Zanzibar”

Join 533 other subscribers
Follow Salambo in Addis on WordPress.com