I spent two days wandering around Harar, enjoying its bustling atmosphere and unique culture. I quickly realised  why I liked the city so much: I could walk around at leisure, something we can rarely do here, and absorb its past. For once, I felt I was in an old city with a history as an urban centre. Most Ethiopian cities are recent creation in terms of urban organisation and development and therefore lack an old centre where we can get a feel of the past. Harar may be one of the few exceptions as it dates back to the 16th century as a city in its own right. Gondar has its history too as capital of the country, but life there centred around the magnificent Royal Enclosure which today is the only remain of its remote past. For the European I am, walking through a city to discover its hidden secrets is part of the pleasure of travelling.

A typical street in Harar

Today Harar is divided into two parts: the old city – known as the Jegol – within the walls built in the 16th century by Emir Nur and the new town built by the Italians when they occupied the country in the 1930s. The city began to flourish when Emir Nur, who is widely considered as its founding father, won over his Christian rival, the emperor Galawdewos. But as he thought he had established peace, he soon had to face a new enemy: the Oromo people who started to settle in the heart of Ethiopia. As a reaction, he built the protective wall encircling the Jegol to stop any form of invasion and closed the city to invaders as well as peaceful visitors. Harar was to remain closed to non-Muslims until 1875 when the Egyptians took control of it.

During the time of the Emirs from the 16th century to the Egyptian domination, Harar became an important Muslim centre as can still testify the 90 or so mosques within its walls. It also thrived as a commercial centre being located on the strategic route from the Sea to the Highlands. The unique Harari culture is present every where in the Old City: in the various markets, the traditional white houses, the colorful clothes, the old hospital and the narrow streets and alleyways where visitors can so easily get lost.

We stayed in one of the two guest houses in town ran by two Harari sisters who rent out rooms in their respective family houses. Staying there was part of the Harari experience. The decoration and organisation within the house was the same as it ever was with the richly decorated walls in the main family room, which was open to guests outside prayer time. Next to the main living quarter, we were introduced to the wedding room, a small and cosy bedroom where the newly wed daughter of the house was required to spend the first six days following her wedding. During that time, the new spouses were getting initiated to the intimacy of marriage. A small window allowed the other family members to pass food, drink as well as expert advice on how to behave in the bedroom. Such tradition is no longer in use as marriages are no longer arranged in Harar, and the bedroom is now used to store mattresses or as a guest room when needed. Being able to stay in a traditional house was nevertheless an exotic experience. 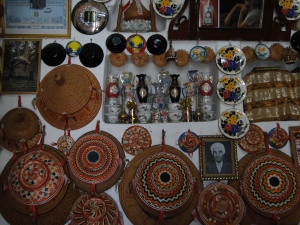 wall decoration inside a traditional house in Old Harar

Harar is also known for its coffee, one of the best in Ethiopia, as well as Khat, the indigenous plant people chew, which is considered a soft drug but is legal in Ethiopia. We saw piles of the plant in the market in Harar, as well as many people, young and very old, with green teeth and lips, an obvious indication that they were chewing Khat. The trade of Khat has become so prominent in recent years that local farmers prefer to cultivate Khat instead of coffee, even if the latter remains a strong export commodity. 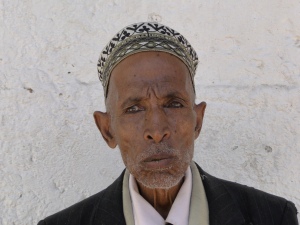 Writing about Harar without mentioning Mr Yusef, the hyena man, wouldn’t give justice to the man who has built a sound business feeding the local hyenas at night. A number of books talk about an ancient tradition in the city to feed hyenas to protect its inhabitants from possible assaults. Whether this is true or not, every night, Mr Yusef is waiting for them just outside the old walls with a bucket full of raw meat. The show is well organised, the taxis and Bajaj (the local name for a tuktuk) leave their lights on for visitors to see better in the dark (at a price), and the hyenas turn up as expected to get their dinner. Mr Yusef encourages visitors, especially children, to help him feed them by putting a piece of meat at the end of a long stick. The next day, we coincidentally met Mr Yusef in town with his family. He looked very distinguished and they were all very well dressed. We were later told that he also owns a very successful farming business, so he is a personnality in town…thanks to the notorious animals that hyenas are.

Feeding the hyenas at night outside Harar’s walls

5 comments on “Old and new Harar”