A trip to the Danakil (part IV): the antiquated salt extraction techniques

As the heat was quickly rising, we had to make a move to the salt extraction plains, another unexpected sight. It was already midday and the sun was getting very hot. I had imagined a somewhat mechanised way of extracting the salt, it was the opposite and again, we had a glimpse of a picture unchanged in more than two millenia. On an open area of about one hectare, workers, in a squatting position and with rudimentary tools, were turning up the earth’s crust to get the salt and cut it into standard size plates. As a matter of fact, the whole region is just salt, it appears at the surface as dry and cracked earth but it is actually salt underneath.  As I mentioned before, the salt deposits were the result of reccurent flooding from the Red Sea, when the ongoing rifting process in the East African Rift Zone allowed sea water to enter the area. Following each flooding episode, partial or complete evaporation of sea-water resulted in thick deposits of salts which are highly stratified. 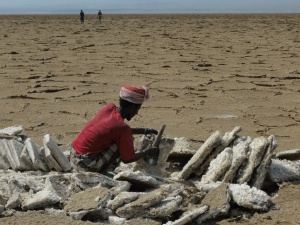 The camels were sitting down, resting in the full sun before being loaded with the newly cut salt plates. We were informed that each plate, weighing around three kilos, is sold for 3 birr at the extraction site and for 30 birr at the market in Mekele and each camel can carry 50 to 60 plates (I am not sure of these figures, this is a broad guess as we couldn’t get precise information from our guides). Nevertheless, what we witnessed was hard physical labour in strenous conditions. 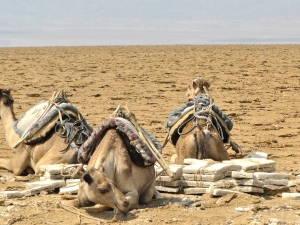 camels ready to be loaded with salt in Dallol

After a full morning in Dallol, seeing more hot springs and geysers we went back to our shelter in Hamadila where we spent the afternoon lazing about and drinking coffee (we even had a full Ethiopian coffee ceremony prepared for us). The afternoons are so hot there that it is difficult to go anywhere or visit any site. All we could do was lie around chatting on our Afari beds, trying to rest before the long drive to the Erta Ale volcano the next day. We were paid a visit by one of local chiefs, or at least he introduced himself as such, a rather arrogant peacock-like character who looked much younger than his actual age. He boasted about his three wives scattered around northern Afar and almost proposed to Gina as he explained that a farenji fourth wife would be a definite asset. Her red hair and very light Irish complexion must have made an impression on him! What we had guessed was confirmed a little later: he came around to collect money for staying in the camp. The next morning, he was also there for breakfast. Our guides explained to us that in the Afar culture, private property does not exist so when one member of the community has money or any other asset, he shares it with the rest of the community. An Afar man would not understand that food is not for everybody around. I mention men because we didn’t see a single woman around. They seem to stay hidden, apart from the occasional walk they take wearing the traditional Afar dress which covers them from head to toe, even if some parts of their body such as the waste or the back are shown. Afari men wear a very distinctive sarong type of long-skirt usually in a check-pattern fabric.

young Afari man with filed incisives as required by tradition

The same evening, we ventured into the “army” bar for a beer. It was a very basic tent put up directly on the ground (which served as floor for the bar), but it had a generator to power a fridge and a TV.  As we entered, we saw about 30 to 40 men, probably local workers, who were watching a very soapy and seemingly romantic TV series, not unlike some of the Bollywood shows, and they seemed to enjoy it! It must be their way of relaxing in such a lonely and isolated place.

We spent the next day driving on sand tracks through the Danakil desert to the base of the Erta Ale volcano. The drive, which went smoothly, took about seven hours including a one hour stop in the village of Kasawat, the last Afar village before the volcano where we had to pay the local chief to get permission to continue on our journey. Our guide had to deal with all the procedure, but we were honoured with a visit by the chief who came to greet us and wish us a good trip. Paying him also means securing protection and avoiding unwanted hassle for the rest of the journey. Again we didn’t see a single woman or girl in the village, they were all male. The only time we came across a woman was at a nearby water point, a handmade mud well where they go to fetch water. In Afar culture this is a woman’s job, she has to walk all the way and carry the water back regardless of the weight. She refused to be photographed and we proceeded on. Once in the base camp of Erta Ale, we had to wait for dusk to start our three-hour walk up to the crater where we would spend the night. 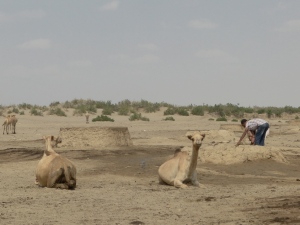 a water point in the middle of the Danakil desert

One comment on “A trip to the Danakil (part IV): the antiquated salt extraction techniques”