A trip to the Danakil (part III), the amazing sulphur plains

For visitors, Hamadila is the base from which to see the salt extraction sites as well as the famous sulphur plains of Dallol, one of the main attractions in the Danakil depression and a real feast of colours. We went there early on the third day of our trip, and of course were not disappointed. Everything in the Danakil lives up to expectations, because it is so different from anything we know; we really felt we had come to a different planet. Our first vision was a surreal desert castle with organic and in some parts phallic shapes. It was a natural formation made of soil and cristallised salt and created through an erosion process on the edge of the sulphur plains.

We started climbing up an adjacent hill covered with mushroom-like shapes and once at the top, we got a full view over the amazing and colourful sulphur plains inside the Dallol crater.  The area was actually formed by a volcanic explosion during which the basaltic magma merged with existing salt deposits. The last explosion which occured in 1926 and is technically known as a phreatic eruption, formed a 30 metres wide crater where current activity is in the form of hot brine springs. The salts washed out of the underlying layers, are transported to the surface by geothermally heated water and rapidly crystallise as the water evaporates. The characteristic yellow, amber, green and red colours are the results of sulphur and potassium salts coloured by various ions. 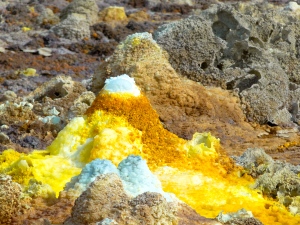 the colourful sulphur formations in Dallol

As we walked down to what is the lowest point on earth, the smell was quite powerful and reminded me of some of the spas in Italy where the spring water has a high sulphur content, which is supposed to be good for articulations and respiratory problems. So we took a deep breath to clean our lungs from the dust we had accumulated over the past couple of days driving in the desert.  As we walked directly on the plain (I wonder how much it gets damaged with visitors), we were stunned by all the amazing colours giving relief to the organic shapes: shades of dominant yellow merging with deep green and turquoise; infinite variations of copper, amber and ochres. From the pictures I had seen of the area, I was expecting those shapes to be of human size if not bigger, in actual fact, they are very small and do not rise above 50 centimetres. Walking in Dallol is like walking on the crust of the Earth, on a planet we don’t know and never see. Because of its surreal landscape, Dallol has been used as a film setting, the last film to be shot there being the Clash of the Titans.

An Afar guard watching over the Dallol sulphur plains

The salt deposits were the result of reccurent flooding from the Red Sea, when the ongoing rifting process in the East African Rift Zone allowed water to enter from the sea. Following each flooding episode, partial or complete evaporation of sea-water resulted in thick deposits of salts which are highly stratified. The Dallol deposits include significant bodies of potash found directly at the surface. Because of the presence of easily mined potash, which is used as fertiliser, the area has attracted commercial interest ever since the beginning of the 20th century, when Italian explorers undertook a number of expeditions in the Danakil and recognized the surface deposits. Consequently, an Italian mining company established itself and started mining and exporting potash and salt which were initially transported by camel and then by rail to the small Eritrean port of Mersa Fatma on the Red Sea. They mined potash in the area until the 1930s. After a long dormant period, interest in the area was renewed when a few years ago, the Ethiopian government granted licences to a number of companies, mainly Canadian, to mine potash. They include Ethiopian Potash Corporation (EPC) and Allana Potash Corp, both traded on the Toronto stock exchange. Australian mining company, BHP Billiton, which also held a licence recently announced its withdrawal from the project. Since the 1998-2000 war between Ethiopia and Eritrea triggered by a border dispute, the Danakil, located on the Eastern border between the two countries, has been a zone of heightened tension. The Dallol potash will have to be exported through the port of Djibouti using the new asphalt road currently being built. 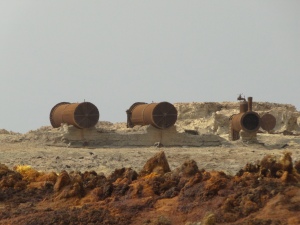 abandoned steam engines, a testimony of past mining activity in Dallol

For information on the geology of Dallol, I used the following website: http://www.photovolcanica.com/VolcanoInfo/Dallol/Dallol.html

One comment on “A trip to the Danakil (part III), the amazing sulphur plains”