The Italians of Addis

I recently had dinner at Castelli’s, one of the most famous Italian restaurants in Addis and an institution in the city. When searching online about it, I was surprised to read so many raving reviews of the place. Most travel sites and guides agree that Castelli’s is one of the best restaurants in Africa………..I don’t!

In my view, the food cannot compare with even a simple trattoria in Italy.  I chose the home-made fettucini with truffle sauce (apparently a classic on Castelli’s menu), which were cooked according to the rules, with the right ingredients, but for some reason didn’t hit the tastebuds. Something like the magic of Italy was missing. Any food taken out of its original context can never taste the same, the flour is not the same, the minerals in the water vary, the soil is different, etc… I actually find that the best food I have eaten in Addis was Ethiopian food (at Dashen, a very simple restaurant but nevertheless one of the best in town), so for Italian food, I’d rather go to Italy than Castelli’s. 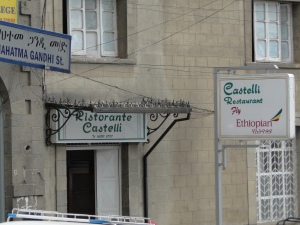 Having said that going to Castelli’s is an experience in itself, which feels like stepping back in time. It reminds me of the type of restaurant found in a small provincial  town in Italy about 25 years ago. An army of waiters is always there, dressed in their old-fashion professional uniform to attend to the guests,  the tables are covered with white tablecloth and napkins folded in the shape of a cone,  the menu is always the same. Probably it hasn’t changed in 30 years, not to say since the restaurant’s opening in 1948. The night I was there the owner, a big chubby man around the age of 70, was sitting right by the entrance, behind the cashier, to welcome the guests – and that is using a euphemism. Wearing a black polo neck, he was abruptly and sternly directing guests to their given table in one of the four, relatively congested, dinning rooms. At about 10pm, as we were having a great time talking and laughing, he indicated to us that it was time to go to sleep, practically throwing us out of his restaurant! 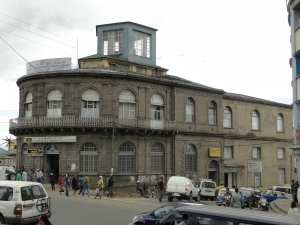 Castelli’s is located in an old 1930s building in the vibrant district of Piazza, which was entirely created by the Italians at the time of the occupation from 1936 to 1941. It was in that building that the Italian Fascist Party had its Addis headquarters, and it was also in front of that building that the Italian crowd of Addis gathered to listen to Mussolini’s speeches on the radio and get news from their homeland. Today, Piazza is the bustling commercial heart of Addis, famous for its silver and goldsmiths.

I have come across a number of people from the Italian community of Addis, and like Castelli’s they are stuck in a world that is no more. They tend to live inside their own community, they rarely mix with Ethiopian people, they marry each other, and if they can’t find the right spouse within their shrinking community, they may look towards the Greeks of Addis or across to Europe. They seem to marry only white people, or at least that is what I’ve noticed so far. Most of them were born in Ethiopia or Eritrea (a former Italian colony), or came as children and never left. They educate their own children in international schools, thus keeping the contact with Ethiopians down to a minimum. They have their own club, called the Juventus club, where they meet to play card and socialise over a drink and which like Castelli’s is a step back in time.They are no longer Italians as the Italy of today is very different from the one they grew up in, or, for the younger people, the one they never knew. They are neither truly in Ethiopia nor in Italy.

5 comments on “The Italians of Addis”

This entry was posted on December 19, 2012 by D. MAGADA in People of Addis and tagged Addis Ababa, Addis in the 1930s, Castelli's restaurant, Ethiopia, food, italian food in Addis, italians of Addis.