Is coffee really from Ethiopia?

According to an Ethiopian legend, coffee was discovered by a little shepherd boy called Kaldi from the Kaffa region in the South-west. While he was sitting under a tree, minding his goat, the animal wandered off in search of food and stubbled across a berry tree. After tasting the unknown berry, the goat started to jump and dance around the field. The boy and his father were so impressed with the effect the berry had on the animal that they tried it themselves. Hence, coffee, with its stimulating effects, was discovered. Even the word coffee, similar in many languages, may have its roots in the name Kaffa. Since these ancient times, coffee has been turned into an art in Ethiopia. Not only the drink is the most popular in the country, but its preparation referred to as the coffee ceremony is just as important. More than the making of a drink, it is a social event and a unique way to welcome strangers. 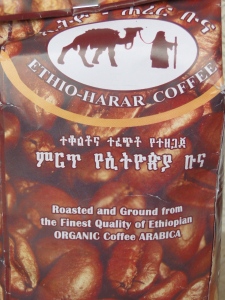 Top quality coffee from Harar, the city of Rimbaud, in Eastern Ethiopia

So when a French academic giving a lecture on the subject, suggested that coffee may have originated in Arabia rather than Ethiopia, it caused an uproar! According to his theory, the coffee ritual is already mentioned in Yemenite holy texts in the 14th century, where it was introduced as a drink to stay awake during the evening muslim prayers. From there, and through the international centre of Mecca, the coffee drink eventually spread to other places such as Istanbul and Europe. He believes that the coffee plant may have been exported to Ethiopia where it could grow in similar conditions to the Yemenite mountains, thus questioning the common belief that coffee originated in Ethiopia. The Arabica coffee plant thrives in a sub-tropical climate at an altitude between 1600 and 2000 metres.

In the 16th century, coffee became a secular drink, consumed not only during prayer time, but also in social gatherings.  From there on, it became the popular drink it still is everywhere in the world. As a result, prices started to climb and the plant itself became a sought after commodity. The Dutch introduced it to Java in Indonesia and then to Surinam and Brazil. Another type of coffee was discovered, the Robusta plant, which grows mainly in the tropical lowlands and which is more resistant to disease but of a lesser quality, with a higher cafeine content and a less refined taste. More and more, coffee producers started to mix the two types to increase their profit.

Today, coffee represents about 50 percent of Ethiopian exports. Some of the best coffee is grown in the region of Harar in the Eastern high plateaux. However, unlike other export countries, it is also consumed locally where it is strongly part of the national identity. In some regions it is drunk sweetened with sugar, while in other people mix it with salt and butter. So suggesting to an Ethiopian National that coffee is not indigenous to his or her country is a supreme offence!

3 comments on “Is coffee really from Ethiopia?”