Nowhere else, a new road would draw so much attention but in Ethiopia. The new highway which just opened a couple of weeks ago is getting us all excited and understandably so. This is the first ever fast six-lane double carriage road in the country, linking Addis Ababa to the city of Adama (or Nazret) east of the capital. What used to be a painful three to four hour journey, competing with trucks and cattle on a narrow single road, has now become a smooth drive across beautiful landscape. And this is only the first stretch, the road will be extended possibly in several directions. 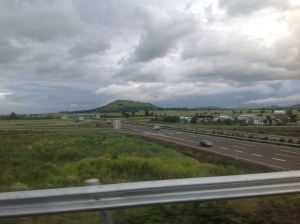 Being as excited as everybody else, we did take the new Express Way (as it’s called) last weekend driving back from lake Langano. We first had to drive for about an hour on a standard road from Langano to Mojo before reaching a slipway into the highway. We were very quick to moan at the lack of obvious direction, but after a few minutes the huge green board indicating the new road suddenly appeared, telling us to turn right. As we saw in the distance the toll station painted in the same green as the direction board, the excitement was building up! We quickly reached the barrier, which has about eight cashiers, and all of a sudden the beautifully empty road appeared just below us. Another few minutes later and we were on it. I don’t think I was ever as excited to take a new road! That’s not it, the drive was so smooth and hassle-free that for the first time ever in Ethiopia we could relax and admire the scenery which turns out to be more attractive than on the old road, especially as the rainy season is coming to an end and the fields are so green. As my nine-year old son said: “it looks like Switzerland!”, yes it did in a way: an empty motorway lined with a peaceful landscape all along. The only downside is that we couldn’t even reach the speed limit of 100 kilometres an hour especially when going up as our sturdy 4×4 car is not built for speed but for endurance. Still the half hour drive to the gate of Addis was very enjoyable for a change… and the road has become one of the hot topics of discussion in the city.