Dashen, a soon to be gone institution in Addis

Before I virtually close down for the summer, I have to write about Dashen restaurant, one of the best traditional Ethiopian in Addis, as it may not be there when I come back at the end of August due to the new urban development plan in the city. Dashen is located in the centre of town, just behind the central Post Office and a 5 minute walk from the National Theatre and Stadium, so what one would call prime location. According to the new government’s plan, all the old historical houses located in the central perimeter (now redefined as business centre) will have to be replaced by tall buildings. 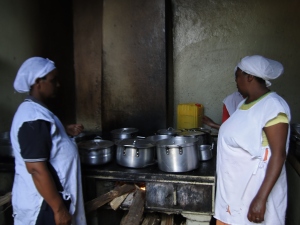 The main kitchen at Dashen

Dashen, named after Ras Dashen, the highest peak in the Simien Mountains, is one of these old houses which will sadly disappear very soon. It was built in the late 1940s by the aristocratic family of Dejazmatch Dagnew Tessema, who was serving the then emperor, Haile Sélassié. His wife Amsalwork Asefaw had distinguised herself in her own right by helping to fight the Italians when they invaded Ethiopia in 1935/36. After emperor Haile Selassié returned from his exile in Britain in 1941 and regained control of his country, a new period of peace and reconstruction opened in the ancient Abyssinian kingdom. That’s when Dagnew Tessema decided to purchase a piece of land in the lower part of the city which at the time was a swamp with no infrastructure whatsoever, to build a new house as an investment. He consequently drained the area and built a new road to access his house. A decade later, Dagnew Tessema unexpectedly passed away and the family had to find a new source of income. As Addis gained international status with the creation of the African Union in 1963, the house was rented out to a new international educational institution and became a school. The family was able to live on the rental income as well as the sale of grain from their land in the country.

Another 10 years later in 1974, in a bloody coup d’Etat, the emperor was deposed and replaced by a socialist-marxist regime known later as the Derg. Private property was nationalised and well-to-do families had to choose one house to keep as residence and give away the rest of their assets. Amsalwork Asefaw, who was now in charge of the household, chose to keep the newly built house in the centre and moved in with her children. With the loss of land, the family had no source of income anymore, so she decided to open an eatery in her own house as a way of making a living. “She had experience in organising and managing big meals for 50 people or more, so her friends suggested to do the same but for paying customers,” explained her daughter Manale (the same Manale who came back to Ethiopia a few years ago and started designing jewellery).

The family lived upstairs while the downstairs part was refurbished and turned into a restaurant. From a simple eatery in the late 1970s and 1980s, it became a better known restaurant, particularly for the quality of the food and its special atmosphere with traditional singing and dancing every friday and saturday night. When Amsalwork suffered a stroke in the early 1990s, she continued supervising the business with the help of her children until she passed away in 1998. Her children then decided to continue running the restaurant, they established a joint company and appointed one of the siblings as manager. Everything was running smoothly until the government issued its new urban development plan and declared the centre of Addis a business district. The Dagnew family is not evicted from their house but is given the option to build a 20-storey building instead. “At first, we were told we could build a four-storey building, so we found some investors who were prepared to get into the project with us,” said Amha Dagnew, Manale’s brother. “But now the plan has changed again and we would have to build a much higher tower, which is beyond our means. We have no choice but to leave our family house behind and move on with our life.” They said that the compensation they were offered doesn’t reflect the potential loss. 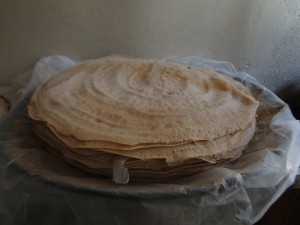 I was given access to the kitchen and work quarters to be able to record what will soon be gone. For some of the staff, who have been working there for more than 20 years, it will be a loss of livelihood as well as a drastic change of life, particularly those members of staff who live in the premises. In the main kitchen, the cooking is done on two separate wooden ovens: one for fasting food and one for non-fasting. In the Ethiopian orthodox tradition, people fast three days a week on Mondays, Wednesdays and Fridays when they eat no animal products whatsoever, including milk and butter. Another room is dedicated for injera baking, the traditional tef based pancake used as staple food, while a third kitchen is only for bringing the food orders in and preparing the dishes ready to be brought to the customers.

In yet another back room, meat is being cut to make tibs, another traditional dish made of beef cubes cooked in spices. Next to it, there is also the cold room with three freezers and the larder where onions are stored. In total, 36 people work in the restaurant with most of the staff employed in the kitchen. I feel personally sad because I really enjoyed going there. It is a very genuine place where the true people of Addis Ababa gather. When those old houses are being demolished the soul of the past is going too and forever lost. I really feel I am here at a time of major transformation, witnessing the old Addis disappearing and seeing a new, yet unknown city, being born from its ashes.

The main dining room at Dashen

3 comments on “Dashen, a soon to be gone institution in Addis”