On the coffee trail

The longer I live in Ethiopia, the more I realise that coffee is the heart beat of the country. It is a major export crop, it is a livehood for many small farmers, and it is one of the most important beverages. Many other African countries such as Tanzania, Rwanda or Uganda produce and export coffee but they do not drink it as part of their culture (they prefer tea). I am always disappointed to have to drink Nescafé when I travel elsewhere in the region. In Ethiopia, coffee is deeply ingrained in the culture and is celebrated through the famous coffee ceremony, a social cult at all levels, equivalent to the tea ceremony in Japan. 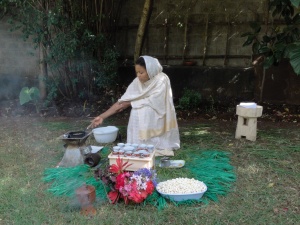 With my personal taste for coffee, I was very interested to travel to a coffee producing region a few weeks ago and visit some of the production centres around Sodo in the Southern Region. Coffee is produced in many places in Ethiopia, but it is most famous around the Harar highlands in the East, and in the Sidamo region about 250 kilometres south of Addis Ababa. The highly praised Harar Mocha variety is one of the oldest coffee beans still produced and is known for its chocolaty and spicy notes as well as its slight acidity. Ethiopia also claims to be the birthplace of the arabica variety discovered in the Kaffa highlands by a young shepherd named Kaldi. While minding his flock, he saw one of his goats dancing after tasting one of the unknown berries. He tasted one himself and thus discovered the stimulating effects of the plant, which turned out to be coffee.

The figures I read come to confirm my observation about coffee in Ethiopia: the country is Africa’s top producer with estimates around 380,000 tonnes in 2011. Half of the coffee produced is consumed nationally, and coffee represents 25 to 30 percent of the country’s exports, with Germany being the number one consumer of Ethiopian coffee. The area where coffee is produced is estimated at about 400,000 hectares, although the exact figure is not known because of the fragmented nature of the farms (run mainly by small farmers rather than large plantation owners). Coffee production is still extremely traditional with most of it done by hand, although this is changing with some technology being introduced to farmers. This was the purpose of my trip: to document a new washing station purchased by a farmers cooperative under a development project, as well as a coffee grading centre known technically as liquoring centre, established under the same project.

a small-scale farmer next to his coffee plant

After harvest, coffee cherries can be either sun-dried or washed. The more traditional method of drying coffee involves manually placing the cherries on raised purpose-built drying beds and living them in the sun until they are ready to be hulled and roasted. Dried cherries usually produce a sweeter and more intense aroma, however, the quality can be irregular. With the washing process, the pulp is mechanically removed and the beans cleaned using water, resulting in a cleaner, brighter and fruiter aroma with a more consistent quality.

The farmers’ cooperative I visited in a remote area between Sodo and Hosaina, was granted a low interest loan to purchase a washing station, and was consequently trained to use it. They use it twice a year after harvest and are now able to sell their coffee beans at a higher price because of the added value. Once washed, they take it to a grading centre where the coffee is graded according to a range between 1 and 9 (1 and 2 being top export quality) and sold through the relatively recent Ethiopian Commodity Exchange (ECX). I will not elaborate further about the ECX trading system, as it is quite controversial with some parties saying that it has worsen the value-chain and killed the speciality origin, while others are saying that it has helped improved the quality of the beans at small farmers level. The whole issue is quite unclear. The farmers I met explained to me that they were shown when was the best time to pick the beans through explanatory drawings. With the discarded pulp, they make compost to fertilise their home vegetable gardens.

At the grading station, I was shown the different types of beans and how they are graded according to their quality. I was also given a sample which tasted much better than the coffee I can buy in retail outlets in Addis. This is because it is not allowed to sell export grade coffee in the country, as it is such a hard currency earning commodity, with revenues of US$ 1.18 billion in 2012 (Only a couple of independent roasters and exporters may be able to I was told).

To finish off on my coffee trail, I visited one of the independent export companies based in Addis, Moplaco, which is allowed to sell high quality coffee in the country because they own their own plantations. The company has just opened one of the nicest cafés in Addis, located in one of their two warehouses. The other is a working place where they sort and grade the green coffee beans. For this reason, the café is currently only opened at weekends, but I hope it will soon open everyday as I am planning to spend my days there so pleasant the atmosphere is.

4 comments on “On the coffee trail”