Ethiopia has such a rich cultural heritage with sites such as the rock-hewn churches of Lalibela or the walled city of Harar, that the church of Adadi Mariam in the vicinity of Addis hardly takes any notice. Built on the same model as her much better known sisters of Lalibela, Adadi Mariam was part of King Lalibela’s ambition to expand his kingdom south. Taking example of what he had achieved in Lalibela, he started to build another rock-hewn church to mark his new territory further south, but never managed to finish it. That is according to the glamorous version from the guide who took us around. I read elsewhere that the church was built in the 14th century by priests coming from the North to convert the South to Christianity, so more than 100 years after Lalibela (King Lalibela ruled at the end of the 12th century and beginning of the 13th). 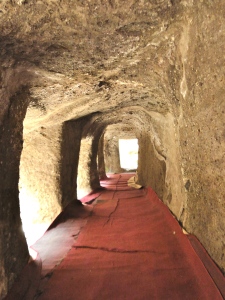 The rock-hewn church of Adadi Mariam, south of Addis

Unable to take my mother and her friend all the way to Lalibela, I embarked them on a day trip to Adadi Mariam. We drove about an hour going south on the Butajira road, until we reached the right turn to Adadi Mariam. From that junction, we had about 12 kilometres of gravel road to the tiny village where the church is. The distance wasn’t long but it felt like an eternity for me. Everybody in the car was silent, I could sense that my visitors were not enjoying the drive and felt shaken at every sharp turn. They didn’t say anything but I could read their mind: when are we going to arrive? I was wondering too as I felt the pressure of having taken them there. I did give some kind of warning though: “we won’t find any toilet so you’ll have to go before and try to drink as little as possible on the way; we won’t find any food either so we’ll have to make it back to Addis in time for lunch.” As they were not that desperate to have another Ethiopian lunch by the side of the road, they agreed with my itinerary. After a very long 30 minutes, we finally reached the village of Adadi Mariam. Again, the drive through a very rural area was an eye opener for them: no facilities, no infrastructure, rudimentary agricultural tools, no car and kids walking to school. They did mention that it was interesting to see rural Ethiopia.

One of the outside walls of Adadi Mariam

At the church, they had another surprise: they had to take off their shoes and walk barefoot down the narrow steps leading to the inside. They were not prepared: “I would have warn socks had I known,” said one of them. As there was no choice, they played the game and went without shoes. From the outside, we could never guess that Adadi Mariam was a church if it wasn’t for the big cross planted on top, as it is fully covered in grass. It was carved into the rock but the outside was never finished leaving it with such a deceiving appearance. Inside, we went through a gallery which goes around the alter and the holy of the holies (the inside sanctuary where only priests are admitted). It was entirely carved with regular openings on the side which let some light in. Even if it wasn’t completed (in some places the ceiling remains low), it gave a very good idea of what a rock-hewn church is, even if far from being as impressive as Lalibela. At least, it was enough for my mother and her friend who both said that they were glad we didn’t make it to Lalibela as they had enough with one church (that after I told them that there were 11 churches like that there). At the altar, we met a group of school kids who came from Addis for the day. My mother and her friend were very touched with how friendly they were. Each kid greeted them personnally in French or in English and shook their hand with a large smile on their face. They thought they were so open and welcoming. That’s Ethiopia at a glance: it can rough and difficult but people are extremely polite and gentle. So they experienced it in a snapshot going to Adadi Mariam.