This week I had to make time to renew my Ethiopian driving licence. Due to my dislike of long and cumbersome bureaucratic procedures, I kept postponing it until I had to do it or I would be driving illegally which is not a good idea in Ethiopia. When foreigners come to live in Ethiopia, they have to apply for an Ethiopian driving licence. The process is quite simple but it takes time. We first have to go to our respective embassy to have our national driving licence validated. Once done, we can go to the Ministry of Transport to apply for a local licence which is valid for two years. That implies going to a number of offices and registration counters and follow all the required steps. The licence can be renewed after the initial two-year period. 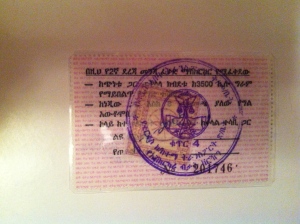 I was expecting the worst in terms of time so I freed a whole morning  to go to the relevant administration. That sounds obvious but it is not. I had to check which office issued my licence two years ago to know which one I should go to, and luckily I went to the right one!

On arrival, I had to buy a form which costs 5 birr (o.2 euros) and which is in Amharic only, so I had to ask the help of my driver to fill it up. It made me realise what it feels like to be illiterate and not being able to even read a form. Once that done, I had to go to another cashier to buy a tax stamp for 6 birr (0.24). Then I went to another office to enter the information on the form into the computer. There was no network so I had to wait (not long, only 20 minutes). Once that was completed, I was sent to the second floor, to office number 205, where I had to wait until they retrieved my file. That office was hidden behing a partition wall, we had to communicate through a tiny window without even seeing the person we were talking to. I managed to have a peak through and all I could see was shelves and shelves of shabby files, fighting for space. After about 30 minutes, my name was called and a lady came out with my file. She took me back downstairs where I initially started and where this time, I had my photo taken (by one person) and the renewed licence was printed and officially stamped (by another person). I was a bit confused as for the picture I had to go inside the office room whereby for getting the licence I was sent back outside in front of the counter’s window, even though it was exactly the same office. That part cost me 100 birr (4 euros). The whole room seemed disorganised with many desks piled up with an impressive quantity of files, however, the staff seemed to find their way through it. Once I had my licence in hand, I had to go to yet another counter to have it laminated. I was charged another 5 birr for that service. All in all, it took me one and a half hour which was amazingly fast, so I will not complain about the Ethiopian bureaucracy on this occasion. I have seen worse, in Italy for instance, where we usually have to go back three times to the same administration to have anything done.

This entry was posted on April 13, 2014 by D. MAGADA in Living in Addis and tagged Addis Ababa, driving in addis, driving licence, Ethiopia.