In the last two weeks, my friend Manale has been mourning for the lost of her sister (biologically her cousin but she was a sister to her) who tragically succombed to cancer. She had been living in New York for nearly 30 years, but decided to be buried in Ethiopia so her family had to deal with the unpleasant logistics of flying back to Addis with her body for the burial.

Funerals are a big affair in Ethiopia, which follow strict religious customs. For three days after the actual funeral, the family of the deceased has to host friends and neighbours who come to pay their respects. If they don’t have space in their house, they put up a tent in their garden or failing that in the street so people can drop by. The custom requires them to feed visitors for at least three days, sometimes longer, and family are usually under strong social pressure to do so. Once these days are over, the mourning period continues for at least two weeks with many  gatherings of close relatives and friends. 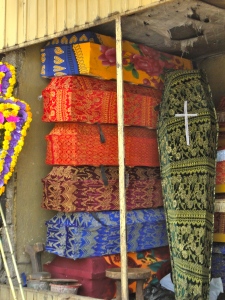 A coffin shop on Churchill road in Addis

When I saw Manale again, about 10 days after her sister’s funeral, she took me to the Orthodox church where her sister had just been buried in the Entoto hills. It was the same church where Manale had been christened as a small child so they  consider it as their family church. For some reason, she had to take drinking water to the priest there, so off we went with a pack of 10 plastic water bottles to be delivered. While she was giving her offering to the priest, I wandered around the church, watching how devoted Ethiopian people are when praying.

Around the relatively newly built church, which has a square shape rather than the traditional circle shape, I could see the outer buildings which serve as the final resting place for the dead. Rather than being actually buried, the coffin is placed in a type of drawer according to Manale’s explanation (we were not able to visit without advanced notice). Ethiopian coffins, which are mainly sold on Churchill road in Addis, are extremely colourful with an outer lining made of red, purple, green or yellow embroidered fabric. In the Orthodox faith, the deceased are buried in the place they choose; it can be a cemetery, a monastery or a church although the latter tend to be reserved to well established families.

Unlike in other religious customs, husband and wife are not buried together, they tend to choose the place that is the most relevant to them as an independent person. That day, Manale told me that her mother was resting in the Holy Trinity church in Addis, the church where emperor Haile Selassié is buried and which was reserved for resistant and fighters against the Italian occupation, while her father had chosen a monastery near Gondar in the Amhara region where his family was originally from.