I took my yougest son (he’s six) for a haircut yesterday, to a local hairdresser I usually go to and conveniently located in a recently built shopping mall, the Laphto center. While he was having his hair cut (it tends to be slow but very cheap), I was there, sitting in a lounge chair, day-dreaming and reading magazines. The choice on display on the table was very interesting. I started with Elle Magazine in German from Oktober 2006, a special edition on hair styles, I don’t really read German but with the pictures I could get what it was about and even learn new words. After that, I read another Elle Magazine, this time in Dutch from January 1998, with a special feature on the horoscope for the year. Shame I could not understand as I could have checked in retrospect if the prediction had materialised. Still, it was fun to see all the usual celebrities looking so much younger. 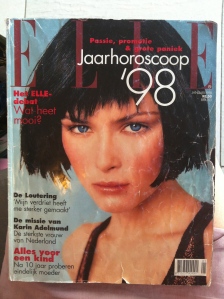 I am smiling about it but it is a regular occurence in Addis to read out-of-date magazines. They even have a sale value on the street where it is not unusual to find back copies of many international magazines, including Selamta, the Ethiopian airlines free in-flight magazine. In the street, it sells. I even saw myself buying old copies of French magazines I hadn’t read before outside the French Lycée on Churchill road! I know the vendor now, a man in his 40s who speaks very good French, so when I have old copies of magazines brought back from Europe, I give them to him so he can sell them again second hand. He also has an interesting collection of history books on Ethiopia, all in French, which I think I am the only one to buy. There are actually very few bookshops in Addis; international magazines can be purchased mainly at the Hilton and the Sheraton, and some national magazines are on sale in the more recent supermarkets (we are talking here of just two magazines sold by the cashier, not a magazine stand like in other parts of the world). This is why we enjoy so much wandering around bookshops, especially independent ones, when back in Europe, but we are not deprived, we can read here.

This entry was posted on March 7, 2014 by D. MAGADA in Living in Addis and tagged Addis Ababa, Elle magazine, Ethiopia, ethiopia hairdressers, Ethiopian magazines, life in Addis, reading in Addis.