I braved the traffic and the bad roads to go to my friend Fitsum’s workshop across town on the CMC road as it’s known as. Fitsum has a small business making handbags and other leather accessories (I’ve already mentioned him on this blog last year). I met him again last November at the Tropical Gardens Bazaar, one of the main crafts and design markets catering for expats in search of local gifts. In the course of our encounter there he insisted that I went to see his new “factory” as he calls it. So I just did. To my great surprise, he had substantially expanded his business. He no longer works in a small shack at the back of his house where he and his five workers were making bags in a cramped makeshift room. Instead, he now works in a transformed workshop in his house where he can fit in ten employees at ease. 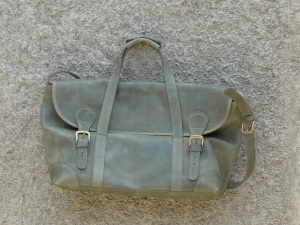 I could see why he was so proud of it: the room is spacious, neat and clean and looks like a professional workshop. It is always uplifting to see a business doing well and growing rather than the opposite, so I was very pleased for him.

He still takes orders from re-sellers, which I understand is the backbone of his current business. To complement it, he produces tailor-made bags for individual customers, who usually bring a model of a designer bag to be reproduced. He is very good at making copies, particularly from a model rather than a picture. On a couple of occasions, I asked him to reproduce a bag from a picture I had brought but the result was far from convincing. I realised then that it was very difficult for him to translate a two-dimension image into a physical object. I don’t know whether this comes from training or education, but mentally moving from abstract to concrete seems to be a difficult exercise for him, and the result was nothing like what I had anticipated ( in other words, the bag didn’t look like the one in the picture at all!).

He learnt to make handbags through a training provided by UNIDO; the United Nations Industrial Development Organisation based in Vienna, Austria. Maybe his training was based on craft production rather than design and creativity. As I see it, it seems difficult for someone like Fitsum to break away from his technical training and freely move into a more creative sphere, but maybe he doesn’t want to, he is just happy making a good living from manufacturing handbags. I am again looking at the situation with my European eyes, maybe for him being creative is not the priority…