Fall of the Derg

Last week Ethiopia celebrated the fall of the Derg regime (on 28 May on the international calendar to be precise). The Derg (which means committee in Amharic) was the bloody communist regime led by Mengistu which governed Ethiopia in the late 1970s and 1980s following the coup d’Etat against Emperor Haile Selassie in September 1974. In its 17 years of ruling, Mengistu’s government was responsible for many atrocities against its own people, governing by force, intimidation and mass murder. Instead of bringing progress to the country as it had claimed to do when embracing the communist ideology, it left it in dire economic conditions which many will remember with the recurrent famine of the 1980s. 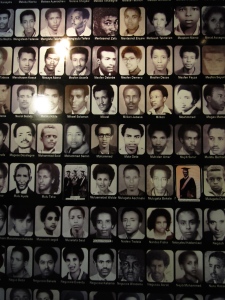 Some of the many victims of the Derg regime

The Derg or Coordinating Committee of the Armed Forces, Police, and Territorial Army, was officially established in June 1974 by a group of military officers to maintain law and order following a widespread mutiny in the armed forces earlier that year. In the months that follow, the situation deteriorated and instead of putting in place a constitutional monarchy as was initially proposed, the Derg deposed and imprisoned the emperor to seize full power. In September 1974, the Derg renamed itself as the Provisional Military Administrative Council and took control of the government with Mengistu Haile Mariam as its chairman, while eliminating in the process all the members loyal to the former emperor. The Monarchy was officially abolished in May 1975 and Marxism-Leninism proclaimed the ideology of the State. The former emperor died a couple of months later, presumably killed on Mengistu’s order.

a raid to a civilian’s house during the Red Terror

However, a strong opposition was voiced from the onset and the following two years (1975-1977) are remembered as a period of civil conflict and harsh violence on all sides, later described as the Red Terror. During that time, the Derg government unveiled its brutal methods and murderous techniques (some of them learnt from the Stasi in former East Germany) to get rid of unwanted opponents. Wanting to know more about it, I went to visit the Red Terror Memorial, a new memorial/museum which opened in Meskel Square in Addis in 2010, to commemorate the many victims of  the infamous regime. The Memorial is the result of an initiative from former victims and close relatives of the victims who collected archive material, photographs of the deceased and testimonies to create the museum. They give their time to take visitors around and give explanations. Entry is free of charge, but donations are welcome to continue the work. I found it very interesting as well as profoundly touching to see the photographs of the time. Beyond the horror of the crimes committed against humanity, what surprised me was how little the urban landscape of Addis Ababa had changed in 40 years, another evidence of the huge economic set-back brought by the regime. 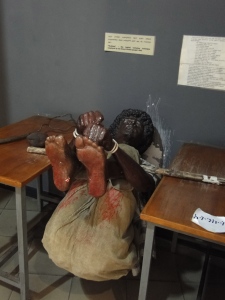 Torture method as displayed in the Red Terror Memorial

Although there was a shimmer of hope at the beginning when the Derg redistributed the land to the farmers and nationalised the industry, it gradually became apparent that the regime was to focus mainly on increasing military equipment supplied by the Soviet Union to fight opponents and separatist guerilla groups in Eritrea and Tigray among others. Such policy culminated in the deadly famine of the mid-1980s which drew the World’s attention to Ethiopia and its Derg regime. In that context, the Derg dissolved itself in 1987 to establish a civilian constitutional government with Mengistu as its head, but the attempted reform came too late. By then, the Soviet Block, who was struggling with its own internal problems, had gradually withdrawn support to such foreign governments. With Soviet funds dwindling, Mengistu’s government was no longer in a position to fight the many guerilla groups, and at the end of January 1991, a coalition of rebel forces, the Ethiopian People’s Revolutionary Democratic Front launched its highly successful Operation Tewodros to seize the northern cities of Gondar, Bahar Dar and Dessie. Mengistu and his family fled the country via Kenya and have since lived in Zimbabwe where they were granted asylum. The late Meles Zenawi, who governed Ethiopia from 1991 to his untimely death in 2011 was one of the main rebel leaders.