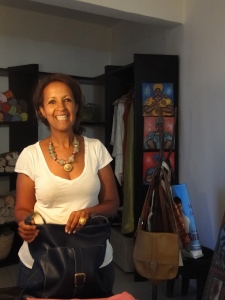 Hiruth is part of a generation of Ethiopians who spent a long time abroad before coming back to settle. She worked for large companies in the UK for a number of years until she decided that she wanted to have her own business and move back. She started by running a catering company, which she still owns but no longer manages, and after some time she went for her passion for handbags and clothes. Since she took the jump in 2006, her label, MELA, has become a reference in Addis for handbags and accessories. Her bags, made from top quality Ethiopian leather, are colourful and creative and tend to follow the international designers’ style. Compared to the many other bag makers, her products are made with taste and finished well. The leather industry and craft is an important source of income in Ethiopia, however, often the finished products are not made with great care which is a shame for the high quality leather used.

A couple of years ago, Hiruth opened a second store in the Old Airport area, a residential area favoured by the international expat crowd, mainly because she was hoping to diversify into traditional Ethiopian furniture. However, she recently gave it up because of the high rent. This is one of the difficulties of running a business in Addis: landlords get carried away when they see that a business or shop is doing well and tend to ask exagerated rental rates, which businesses cannot sustain. As a result, we see many empty shops in newly built premises. Hiruth recently told me that she is looking to move out of her store in Bole because of a plan to build a high-rise tower next to it, which would seriously affect her, at least during construction. She said she is suffering enough from the road work on the new Bole road which is temporarily preventing access to her shop. She has nevertheless managed to keep her customers mainly because very few people produce bags of the same style and quality.