From Paris to Addis

You know you’ve become a true expat when you look forward to going to the Diplomatic Bazaar in Addis. Organized once a year by the many embassies and ambassador’s spouses, it is the foreign community’s biggest gathering in the Ethiopian capital. This year, it was held on 24 November. Each embassy had a stand selling national products, mainly food. Because the choice is so limited in Addis, it is the one opportunity in the year to buy French cheese flown in directly from Paris, Scandinavian smoke salmon, Greek olives, Italian parmesan cheese, Tunisian dates, Egyptian sweets, Palestinian falafel, Japanese sushi, South African Peri-Peri sauce, Brazilian soap and so on, the list is long. 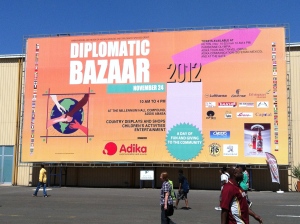 I normally hate this kind of big and noisy fair, made worse by its location in a large warehouse style of hall, but I realised to my dislike that I was actually keen to go. Once there, reality kicked in, the fair was as unpleasurable as I thought it would be; the place was hot, busy and loud. I nevertheless ran to the French Embassy stand to make sure I could still get some cheese (at inflated price) as I was told they would sell out within two hours of opening the stand. The nearby Russian stand was selling vodka shots with caviar canapés, the Swiss stand chocolate, the US stand sugary snacks, the Belgian stand sausages, while most African countries were selling fabric, textile and handcraft objects.

While I was having some sushi and falafel for lunch, I met at least ten people I knew who like me found the place too hot and too noisy, but felt a compulsion to go as well. It was almost like going to a village fete on a national day. Whatever the country, such celebrations are very similar: a lot of national food and drink, loud pop music played by a mediocre band, a few banners and national flags and useless objects and souvenirs for sale. Such is our international microcosm in Addis. A great number of them met again today at the Great Ethiopian Run, a 10 kilometre run through the city, where some of the biggest Ethiopian names, such as the Olympic winner Tirunesh Dibaba, usually compete. I was told that a group of ambassadors went for the run, as well as many residents of Addis. I decided not to participate, not because of the running, but because of the immense crowd (around 40,000 were expected) which always gives me a strong feeling of claustrophobia.