Back in Addis after Meles’s death

I arrived back in Addis very early on Saturday morning, the day before Meles Zenawi’s state funeral. I came back to a country in mourning. Everywhere vigils were organised and candles lit for him, even at passport control in the airport. His picture was displayed all over the terminal, with the following quotes written both in English and Amharic: “We will strongly vanguard our constitution which is the product of your struggle”…..or “Your achievements will remain in our heart forever”. In the centre of town, vigils took place every night, life size posters of Meles were put up in all the main streets and squares, and the atmosphere was one of sadness and collective grief. It reminded me of the reaction to the death of Princess Diana in London in 1997.  Just like hers, Meles’s sudden death took the country by surprise and left a big void which will take time to fill. 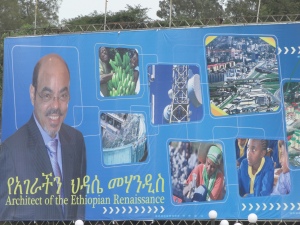 Meles had been ruling Ethiopia for 21 years since 1991, when as a young rebel he seized power and overthrew the infamous Derg regime, which had left Ethiopia in a dire state of poverty. He dedicated his life to rebuilding his country and brought it into the 21st century, developing the economy and reconnecting with the world. Two decades later, results began to show with a published double digit growth rate and rising foreign investments into the country. Under his rule, Addis Ababa emerged as the diplomatic capital of Africa, being the host city for the African Union headquarters and many UN and other development agencies. However, his government was also heavily criticised in terms of democracy and human rights.

At his grand funeral which lasted about eight hours on Sunday, many heads of State paid tribute to his achievements and total dedication to his beloved country.  The event was aired live on Ethiopian TV, and giant screens put up in the regional capitals around the country. The streets of Addis were so crowded that it was practically impossible to get near Meskel Square, the main city square. I was curious to join in to get a sense of the event and feel the emotion of the place, but it proved almost impossible, so I gave up on the idea and watched it on TV instead. As one local said, this was the first time in hundred years Ethiopians could actually bury their leader. The previous head of government, the infamous Mengistu fled to Zimbabwe, where he is still living. His deposed predecessor, Emperor Hailé Sélassié, was hastely buried under his office in the presidential palace after being allegedly murdered in 1975 (this fact is still disputed today). Before him, Ethiopia’s heroic king Menelik II, who won the war against the Italian invaders and kept Ethiopia’s independence, didn’t have a grand funeral either. When he died in 1913, he was already out of power for about four years because of a stroke which left him incapable of governing. His wife Taitu ruled on his behalf until a regency council was organised and the succession agreed.

With Meles gone, a page is turning in the history of Ethiopia, with all the new challenges that it will bring.  The city is gradually returning to normal life, but the posters are still up on every single street and square, on buildings, on public buses and taxis, as if Ethiopia needed more time to say goodbye and move on.