Bahir Dar is a pleasant town on Lake Tana, the largest lake in northern Ethiopia. It is also the regional capital of the Amhara region, but it is most famous for being close to the source of the Blue Nile, one of the branches merging into the Nile river. Lake Tana is usually considered as the source of the Blue Nile, even though it technically starts in the hills just above Bahir Dar before going into Lake Tana and coming out again to the south-east. 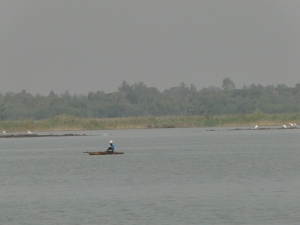 Further downstream are the famous Blue Nile falls, known locally as Tis Abay, which used to be some of the most impressive ones in Africa before the construction of a dam on the river. I was told before that the waterfalls were very disappointing and hardly worth the trip, particularly during the dry season. As it happened, I took the trip in May, which coincides with the end of the short rain season, a time of quick and sporadic showers.  The falls are only about 30 kilometres from Bahir Dar, but it takes one hour on a bumpy dirt track to reach them. Once there, we first had to take a tiny motor boat to cross the Blue Nile before walking through fields of cotton and Khat to get to the waterfalls. As we got near to them, I was stunned with the speed and power of the water coming down. Even if reduced in size, the falls are still impressive. Our guide told us that the producer of the adventure movie Mystery of the Nile, the epic story of an expedition down the Blue Nile, paid $1 million to have the dam opened for a day in order to shoot the falls in full flow. I don’t know if it is true but it is an interesting story, and if so, it must have been an amazing sight!! I’ll have to watch the film…

As customary in Ethiopia, a local guide from the local community took us there. Along the way, many children were trying to sell us small objects they had made or found. Some of them were even begging for money, even though the government doesn’t allow it. This is a big issue in Ethiopia as many children are tempted to beg on the streets instead of attending school, in the belief that they will get a lot of money from foreign visitors. With the daily basic wage equivalent to about $3, it is easy to understand how visitors end up giving much more than they think in actual value. By begging, children can sometimes earn in a day as much as their parents or more, which leads them to think that it is better and more profitable to beg. As much as it can be provide a quick relief, it is not a way out of poverty in the long term. As I was about to get back into our car, a teenage boy begged me to change the one dollar note he was given by a previous visitor. I hesitated but he insisted so much, telling me that I could easily change it back in Bahir Dar, whereas for him who had no means of transport, the nearest bank was hours away. I gave in and swapped the note.

The Blue Nile gorge, downstream from the waterfalls