When it comes to contemporary art, Addis Ababa is a thriving city with a good number of art galleries and exhibition spaces. Its art scene cannot be compared to the one in London, New York or even Dubai, however it is nonetheless respectable. The city has a well known Fine Arts and Design school which every year produces talented graduate artists who go on to set up their own studios. Art, and painting in particular, has always been a strong expression of Ethiopian culture. In many of the orthodox churches and monasteries, we can still admire religious paintings dating back to the 9th century and competing with equivalent depictions in European churches. With such a strong history, it is only natural that fine art continues to develop in Ethiopia.

Since I have moved here, I have been regularly attending the various art exhibitions organised in public spaces such as the Alliance Ethio-française, one of the most respected cultural centres in Addis, as well as shows held in private galleries. The start of the art season is usually marked by the Young Ethiopian artists exhibition at the Sheraton hotel and the New graduates show at the Alliance Ethio-française both held in September. It follows on by regular monthly or bi-monthly shows in the more forward-looking contemporary art galleries such as LeLa art gallery in the Old Airport area and ASNI gallery near Arat Kilo. 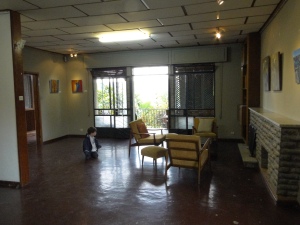 LeLa's art gallery, located in the owner's house in the Old Airport area

I have also visited artist studios to see work in progress, which is a common way of discovering young artists in the city. Instead of working in seclusion in a private studio, they tend to share an open studio, usually in one of the old houses of Addis, which acts also as an art gallery thus allowing them to exhibit their work directly to the public. They are very welcoming to visitors who come to see their workspace.

After a few months of discovering Ethiopian contemporary art, I find that most young artists tend to limit themselves to a restricted number of themes they were probably taught by their masters at art school. So we see countless variations of street scene paintings, featuring the famous “blue donkey” or old VW minivan, the most common form of public transport in Addis. In the same vein, we see paintings of people at markets as well as depictions of orthodox churches and priests with their religious symbols. They are also a few abstract painters, but personally I don’t find their work very original.

It seems that when one painter has made a success with a particular theme, which is the case with the very established artist Zerihun who painted among others the street scenes of Addis, the next generation just copies him with of course some personal variations but no individual creation. Internationally recognized Zerihun, who is now in his early 70s (he was born in 1941) is also a teacher at the School of Fine Arts in Addis. When Emperor Haile Selassie’s regime fell in 1974, he already had a name as a painter but instead of emigrating like many of his contemporaries he chose to stay in Ethiopia. Through his paintings, he became a witness of his country in the 1970s and 1980s during the hardship of the Derg regime. He was also making a strong link with the religious tradition of the country.

Young painters today live in completely different times, and even if they are taught by masters such as Zerihun, I think they need to open more to today’s reality as well as their own inner world. I have seen some rare exceptions, but most of those painters were trained abroad and came back to develop their own vision of today’s contemporary Ethiopian art. They are the ones who stand out. 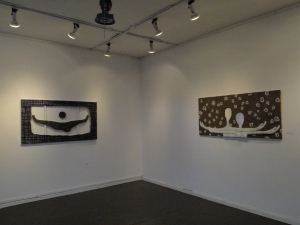