The land of Rastafarians

I am in Shashemene, about 250 kms south of Addis, a town famous for its Rastafarian community. It was emperor Selassie who granted land in that region to African descendants in the West, as a symbolic gesture in the wake of the Black movement spearheaded in the 1920s by Marcus Garvey. In his political movement, the Universal Negro Improvement Association (UNIA), the famous Jamaican political activist and journalist promoted the return to Mother Land Africa for former Black slaves in the West, and the creation of a free and independent Africa.

However, for Rastafarians the link with Ethiopia is more religious than political. In their view, Ethiopia is Zion or the promised land, and the country’s former emperor, Haile Selassie was the second coming of Jesus on Earth, based on their own interpretation of the Bible. For that reason, they took his name. Before Selassie became King of Kings or Emperor in 1930, his birth name was Tafari and his title Ras (meaning Prince), hence the name of the movement, Ras Tafari. For Rastafarians, Garvey is a prophet who guided Black people to return to the Holy Mother Land.

Many stories circulate about Haile Selassie’s visit to Jamaica in 1966. According to one version, the country was suffering from one of the worst draught in its history. As the Ethiopian Emperor came off the plane, it started to rain, and he was immediately reaffirmed as a divine figure. According to another version, the sun started to shine as soon as he stepped out of the plane.  Whatever the story is, his political visit to Jamaica and meetings with Rastafarian leaders gave a lot of credential to the Rastafarian movement, which became mainstream in the Caribbean island. The movement took off internationally in the following decade, helped by the success of Bob Marley and his reggae music. Today three generations of Rastafarians live in Shashemene, and new families continue to move to the town, although not as many as during the height of the movement in the late 1960s and early 1970s. 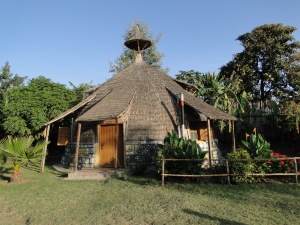 Staying in a traditional Godjo house

We are staying in a lodge run by a French Rasta family, who left Paris a few years ago to settle in rural Ethiopia. Our room is in a traditional Godjo, a circular house made mainly of straw and bamboo sticks. The place is simple but authentic, on the outskirts of the town. Shashemene itself is a small but lively local trade centre, where Rastafarians are still a minority. Many objects and pictures around the lodge remind us of Haile Selassie’s cult. There are photographs and painted portraits of him and his wife, Empress Menem, as well as various representations of the lion of Judah, the symbol he adopted for his reign. Marcus Garvey, their prophet, also features on the walls.  Everything else is decorated with the three colours, Red, Yellow and Green representing Africa’s freedom and independence. Rastafarians also question the fact that Selassie is resting in the church of the Holy Trinity in Addis Ababa, but believe instead that as a godly figure he could not be buried.

Today, Selassie is remembered mainly for defending Ethiopia’s independence against Mussolini’s heavily armed invasion in 1935, and for strongly representing the country internationally. However, in terms of domestic politics, he didn’t manage to achieve as much as his predecessor, Menelik II.

This entry was posted on October 25, 2011 by D. MAGADA in The lake region in the Great Rift Valley, Travelling outside Addis and tagged addis, Ethiopia, haile selassie, lion of Judah, rastafarians, rastas, shashemene, zion.