Getting used to a new way of living…

A lot in Addis happens behind barb wired walls and guarded gates, and that’s something we have to get used to. In many places, we have to go through thorough security checks including on cars, before going in.  The social separation is much more evident than in predominantly middle class Europe: here the rich live comfortable lives behind high walls while the poor only have the street to themselves. Having said that, Ethiopia feels relatively peaceful as a country, people are able to cohabit without social tension, at least for now. Even in the supposedly wealthy residential neighborhoods people are mixed. On a same street, we can see large walled villas as well as more modest dwellings.  I personally feel free to walk around town; I regularly walk to the local supermarket or stall to do my shopping, and don’t feel threatened in any way.  On the contrary, people here let you live your life in a very tolerant way.  They however expect you to be generous and always give to the kids and adults begging along the way. 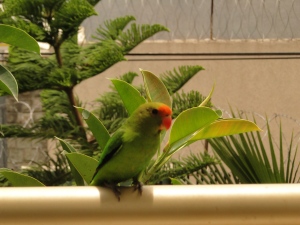 outside my bedroom window

If we are going to live here, it is understood that we have to help local people. For this reason, we are expected to hire domestic helpers, and more than one. Seen from Europe, it may look like we’re back into the beginning of the previous century, when families managed a team of workers at home, and yes socially it is similar. Here too, it is the poor people who work in the houses of rich people, there is no question.  But, it is not in our power to change the social balance of the country we temporarily live in. All we can do at our modest level, is try to help improve a little bit the situation of a few individuals, that is by providing steady work and a decent and regular salary. That said, we employ three guards doing a 3×8 shift, two maids (they work in pairs here), and a cook/baby-sitter who works mainly in the afternoon. It wasn’t that obvious to find a baby-sitter who can also cook, as people tend to specialize into one job only.  The maids daily clean the house (it is needed here because of the many bacteria around), and do the laundry. We currently have no washing machine (it’s in the container) and no dishwasher, so everything is done by hand. Our senior maid, Alem, is a mother of four children aged between 20 and 4. So she still has small children to bring up. She comes at 7.30am in the morning until 3.30pm, so she can be home when her children come back from school, while her younger assistant comes in a little later and stays later. While she’s at work, Alem’s mother helps her with the kids. She proudly told me that her eldest son is working as a driver, which is a social improvement here. Drivers are paid twice as much as domestic helpers, and play the role of manager of the household. They are responsible for paying bills on time (we don’t get utility bills, the payment schedule is indicated on the previous receipt and because it is in Amharic, it is a task drivers take on), they also look for staff if needed and above all, they have an in-depth knowledge of the city. So, they also act as adviser when we are looking for a specific place or shop.  The guards are here to look after the house. They are also our link to the neighborhood; they tend to be local to the area, so they know everybody around. People here rely on tight networks of friends and acquaintances. It is only through them that we can somewhat integrate in the area and be accepted.  With all the initial resentment I had about having so much staff, it quickly becomes normal. It’s up to us to adapt to the local way.

Inside the house, we have locks everywhere, on all the wardrobes and cupboards and even on the fridge door. I find that strange personally. Is it an indication of the hidden mistrust between wealthy families and poor staff, or is it to prevent temptation? Too early for me to say, I will need much more time to have a clear insight into the culture. I don’t lock anywhere, except the place when I put the passports, medical books and foreign credit cards. We are advised to have a bag ready with passports, money and basic medicine in case of an emergency, that is, if we had to leave the country immediately (I hope not!).

This entry was posted on September 16, 2011 by Salambo in Addis at first sight and tagged Addis Ababa, domestic help, Ethiopia, way of life.