A house in Addis

We live in an area called Old Airport because that’s where the airport used to be before it moved south of the city to Bole. It is considered as one of the greenest areas since the former airport was turned into a golf club. However, green in Addis doesn’t mean pollution free. The old diesel trucks still have to go through the area, but we may see less of them. When looking for a house, we decided to go for a smaller house with a garden rather than a huge villa, and in retrospect it was a good choice, as we appreciate a little bit of a “smoke free” private garden. In Addis, all plots have the same size, a system inherited from the previous socialist government,  so many owners prefer to build a large house with no outdoor space rather than the opposite.  Our road was tarmacked two years ago, and even have bumps to prevent cars from driving too fast, a novelty here. 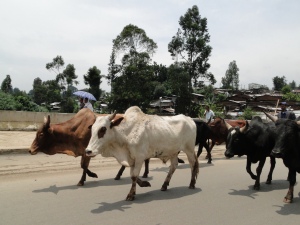 The neighbourhood is in the process of being developed, or maybe upgraded. The South African Embassy has moved to a new building here, a new shopping mall with an outdoor swimming pool and a bowling place has just opened, but many of the alleyways are still mud paths, which becomes a problem during the rain season. We arrived as it is coming to an end, it has however rained every single day, sometimes torrentially. It feels quite cool, especially when it is wet, and the houses are particularly cold. It actually reminds me of Ireland on a wet and cold summer day, we just need to find a place to drink Irish coffees! The city looks rather grey under the rain, especially with the already grey cement buildings currently under construction all over the place.  I find some consolation in thinking about the forthcoming dry season, which I was told, will last until May. We’ll then have temperatures hovering around the 25 degrees Celsius during the day. It must be true judging by the number of outdoor swimming pools around the city. 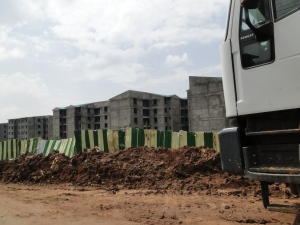 Addis is undergoing a major development and construction programme. Many of the rudimentary shack houses are being demolished to make way for new apartment blocks with better sanitary conditions as part of a new government plan to better the city. I am amazed with the scaffolding system in use here. None of the steel poles we know in Europe, here scaffoldings are made of wooden poles which  at first sight, look frighteningly rudimentary. However, looking closely, the technique for assembling the poles requires intricate skills. I am told that the poles, made from the eucalyptus trees which grow in abundance here, are nailed together when the wood is still wet. Once dry, the scaffolding becomes very strong and resistant, and because of that can only be used once. They remain however dangerous as there is no protection around them to prevent falls, especially since some of them are as high as 15 metres. Once the building completed, the wooden poles are reused in bakeries to heat up baking ovens, or in houses.

This entry was posted on September 10, 2011 by mamaaroma in Addis at first sight and tagged Addis Ababa, Ethiopia, living Ethiopia.