A new form of tourism is all of a sudden developing in Ethiopia: the helicopter ride. Last month, I went back to the Gheralta lodge, one of my favourite retreats in northern Tigray, and to my great surprise a helicopter was parked on the lawn. It belonged to wealthy tourists (I don’t know where they were from but they spoke Russian together) who were on a three-day tour of Ethiopia, which included the Danakil depression, the Simien mountains and Lalibela. The Gheralta lodge, located in the middle of the three places and the only one to offer an international level of comfort, has become the perfect base for such trips. Because of the stunning and varied geography of Ethiopia, the helicopter is now seen as the perfect vehicle to fast see the country’s wonders without having to struggle for it. Anybody else who has experienced the Danakil depression or the Simien mountains by road, knows that it involves an arduous trek, many hours sitting in a car, and rudimentary camping conditions. 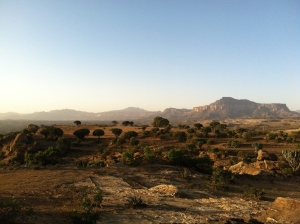 View from the Gheralta lodge (without the helicopter)

Staying in Gheralta at the same time as the helicopter group, I discovered another unexpected aspect of it: the noise pollution. Invariably, every morning at 8am we could hear the loud and buzzing engine preparing to take off and disturbing our peaceful wake-up; the same happened at around 5pm on the helicopter’s return. We like going to the Gheralta lodge to find peace and calmness away from bustling Addis; this time, we felt more like being in an action movie set than in a weekend oasis.

Gheralta is nevertheless very enjoyable. Silvio, the owner of the lodge, an Italian national born and raised in Addis who chose to build a lodge as his retirement project, has succeeded in creating a special place. Not only the rooms in individual tukuls are extremely comfortable (yet simple) and the home-grown food delicious, but the atmosphere of the lodge makes us feel we are at home in our own house. I would recommend it even with the unfortunate helicopter.

Even to climb up Yemata Guh, one of the most famous cliff churches of Tigray, our fellow guests used the helicopter, landing half way up the cliff instead of having the enjoyment of trekking all the way up from the plain below. On that subject, I need to say a few more words about the church. Yemata Guh is well known for its relatively difficult access on top of a narrow cliff, some 500 metres high. To reach it, we first had to walk up the base of the cliff, a steep but easy walk until we reached a vertical wall which needs to be climbed barefoot to progress higher. The wall was not as impressive as I had expected. It is only about three metres high and has some indents in the rock for the hands and feet, so it is quite easy to overcome for a fit person. For the more prudent, the local guides are now equipped with good quality ropes and harnesses (a gift from some Italian friends, they said). Once passed the wall, we continued on climbing between large rocks and stones until we reached a narrow platform, where a baptism chapel is located. I first thought the trek had stopped there and we had reached the church, but no, the best part was yet to come. From that point, we had to freely climb another wall, an easier one with a 60° slope, but which linked two sides of the cliff so it was like a narrow bridge in-between (it was better not to look left and right but to focus on the climb). That took us almost to the top of the cliff and from there we had to walk about five metres on a narrow ledge to reach the hidden church, holding on to the rock wall on our right side not to see the 300 metres drop on the other side. Inside, the church was finely decorated with well-preserved frescoes representing the life of Jesus and the Evangelists among others. The experience was memorable and I was very proud to have made it up to Yemata Guh.

This entry was posted on May 29, 2015 by mamaaroma in Gheralta, Travelling outside Addis and tagged Addis Ababa, Ethiopia, ethiopia in helicopter, Gheralta Lodge, gheralta mountain, Rock-hewn churches of Tigray, Tigray, yemata guh.